Example of how to Teach Reading Online (a challenge)

The Ultimate Guide: How to Teach Remotely – From The New EdTech Classroom

Parent engagement has a significant impact on student learning progress, comfort, and happiness.  Yet few schools or districts have yet designed systems that support ease and variety of two-way communications between district and parent and teacher and parent. We are gathering resources here to see how easy, empowering communications can be integrated into the learning management systems.

Given the explosion of virtual learning during  the pandemic, parents have been more involved in student learning providing a possible increase in the impact of parent engagement on student progress as well as an increase in utilization of technology learning tools  by teachers, students and parent.

A serious equity gap has widened given the disparity in student devices, Internet access, student, teacheer and parent technology app savvy, and parental knowledge of school processes and the curriculum.

We are gathering research and solutions here with an aim to find or create effective home-school communication to support student learning and family engagement.

Link to Waterford.org website– information and links to research on Parent/Teacher/District communications.

Communication Between Educators and Parents in Title I Elementary

A dissertation on parent/teacher communications, types and impacts,  in Title I schools.

Impact of School Closures on StudentLearning

WalletHub analyzed data from the 50 states + Washington DC. Hawaii rated worst in salary relative to cost of living. Check out the full article for other metrics here: Best and Worst States for Teachers

Valid yet: Bertrand Russell’s 10 Commandments of Teaching and Learning-

The Ten Commandments that, as a teacher, I should wish to promulgate, might be set forth as follows:

It takes more than a village: It also takes a hotspot. TeachAClass.org is bringing wireless routers pre-loaded with online education content to provide lessons to rural communities.

As a turbulent snowstorm whips across the vast, desolate Mongolian grasslands, a group of schoolchildren huddle over laptops, their eyes transfixed as the sagacious Sal Khanworks through Newtonian physics.

But Khan is only reaching these kids because of a bold initiative from another creative edupreneur: Neil Dsouza, age 27, cofounder of TeachAClass.org, a San Francisco-based nonprofit dedicated to enabling access to education in developing countries. Dsouza was previously an engineer at Cisco, where he helped develop the first 4G core routers for AT&T and eventually Verizon’s mobile network.

Technology is starting to become a waste in developing countries.

Plenty of people have tried to tackle education in remote areas. The One Laptop Per Child (OLPC) project, for instance, has shipped millions of laptops to impoverished corners of the world. The impact has been faint, however, leading OLPC founder Nicholas Negroponte to recently propose a more radical approach: dropping tablets from helicopters to remote villages, “then go[ing] back a year later to see if the kids can read,” he has declared.

But to those already on the ground, the idea of indiscriminately flinging equipment from the air and hoping for a positive educational outcome seems like a recipe for waste. OLPC has already donated over 7,000 laptops to Mongolia. When Dsouza arrived, he found many collecting dust on shelves. Some have not even seen the light of day, still unopened in shrink-wrapped boxes. 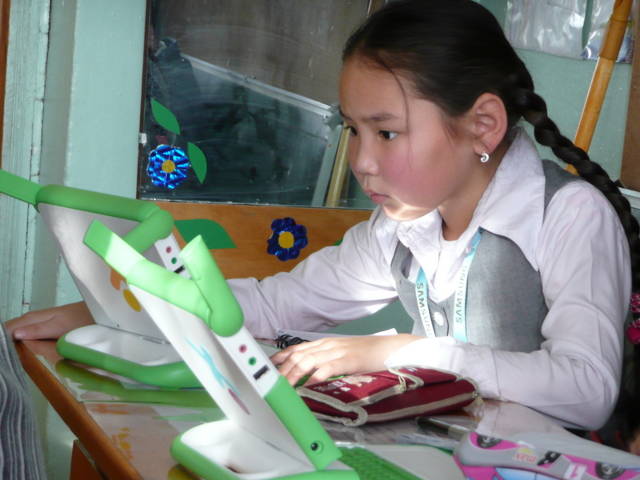 Photo: One Laptop Per Child

“Technology is starting to become a waste in developing countries,” notes Dsouza. He points to startling findings from the World Bank’s very own Independent Evaluation Group that “only 30 percent [of its projects worldwide] have achieved their objectives of implementing universal assess policies or increasing ICT

It’s not just due to misguided strategies like airlifting hardware, either, Dsouza says. Too many Western-driven programs have neglected to take into account geographical limitations and cultural differences–whether it’s failing to realize the lack of basic IT infrastructure in developing countries, or assuming that everyone naturally understands the potential and use of computing devices.

Haunted by memories of piles of unused laptops, Dsouza devised an ingenious plan: Bring a chunk of the Internet’s offerings to Mongolia. He packages content from Khan Academy, MIT open courseware, and other resources into portable, self-contained servers that can be wirelessly accessed by laptops and computers. These servers, which cost roughly $350 apiece, are small enough to fit in a backpack and need only a power outlet to boot up. Other laptops need only wireless capability and a browser that supports Flash to log on. What this creates, in essence, is a local intranet network–what Dsouza has dubbed an “Education Hotspot”–that allows users to access materials hosted on the server, even in areas so remote that Internet is either outrageously expensive or non-existent.

Here’s how Dsouza is distributing his technology: TeachAClass.org has a tiny team of three in San Francisco that collects free content from the web, then taps volunteers around the world to translate the material into local languages. These materials are then copied onto the backpack servers, which get delivered to local coordinators in developing countries. These coordinators–so far 12 Peace Corps volunteers in remote regions–work with teachers in schools and orphanages to set up the “Hotspots.” Content on the servers can be regularly updated via CDs or USB sticks.

The project is still very much in its infancy. So far Dsouza has deployed three Hotspots in Ulaanbaatar, two in the Uvurkhangai province of Mongolia, and one in Takengon, Indonesia–all together serving orphanages that house around 300 children. He plans to set up six more in schools in Mongolia’s Hovd province in the next few months. Next year, Dsouza also hopes to get pilot programs established elsewhere, too, including Sri Lanka, Bangladesh, and Egypt. In India, Dsouza also has plans underway to see how well the Hotspots work with the much-publicized $35 Aakash tablets, which the government has promised to provide to rural schools.

Considerable obstacles exist. Getting buy-in from local officials and educators is not always easy; some can be outright hostile to outsider advisers. But Dsouza has made sure to involve local teachers at every step of his project, providing them with the training required to effectively harness the potential of the Hotspots. It’s opened their eyes and given them a stake, he says, to the point where local teachers are taking ownership of the projects.

And then there’s the matter of funding. So far, Dsouza been bootstrapping this venture largely on his own, something he admits is unsustainable. He has considered returning to a day job to resuscitate his finances or reaching out to investors and VCs to turn the Hotspots into a viable business, despite his initial intentions to make this a nonprofit project.

But buzz around these Hotspots is–excuse the pun–starting to heat up. Dsouza has given talks at TEDxUlaanbaatar and the Global Education Conference. Earlier this year, he was awarded runner-up at the Houghton Mifflin Harcourt Global Education Challenge. Even the World Bank sees potential, having allocated a small sum ($3,200) to pilot this project–not for orphans and students, but nomads and herders, who will use the Hotspots to access information relevant to their day-to-day activities and improve their knowledge on production and supply.

Dsouza remains humble about his work, framing it in terms of making the best use of existing technologies rather than creating something radically new. “We’re not trying to reinvent the wheel, but rather focus on finding ways to recycle technology and resources–the hardware, content, and networks–that are already in place.”

Common Core- What is it Really???

The three previous posts give a view of Common Core 4th grade standards measured by SmarterBalanced and PARCC assessment questions.

These questions show, I believe, the type of thinking essential to personal success and to cultural and economic growth. For more examples at more grade levels, check out these links and look at the rubrics for grading.

The Basis for the Common Core 4th Grade Question Posted